Can Clean Hydrogen Help Replace Coal In The Rockies? 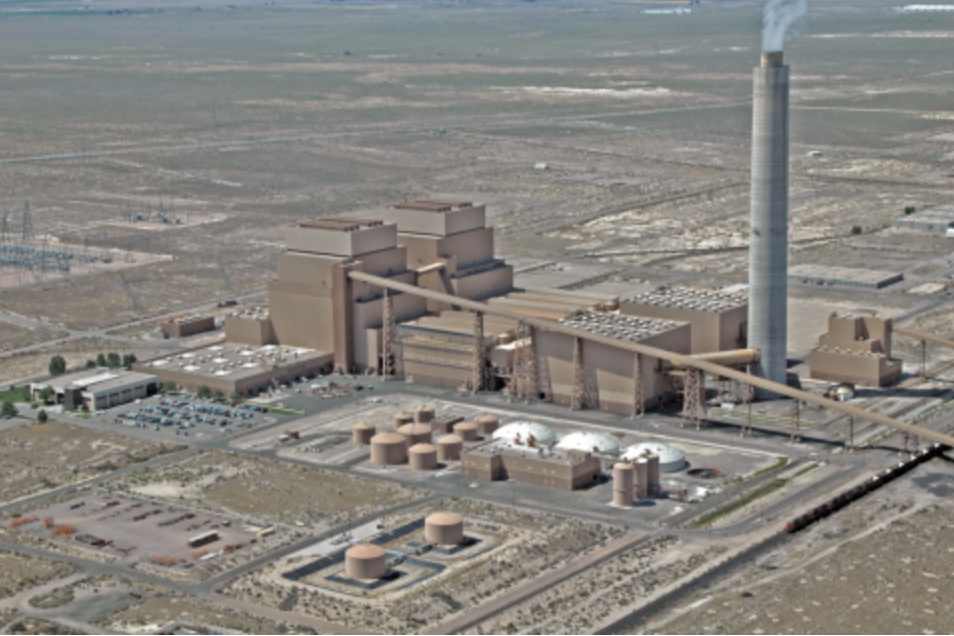 In our view, there are two or three clear leaders in the competition for billions of dollars in U.S. support for clean-hydrogen hubs — for example, it would be hard to imagine the Department of Energy (DOE) passing over hub proposals in Texas, Louisiana or the Marcellus/Utica. At the same time, there’s a lot to be said for plans to develop hydrogen hubs in California, North Dakota and, we might add, the Rockies, a region with extensive energy-related infrastructure and a long list of prospective clean-hydrogen end-users, not to mention at least two projects to convert coal-fired power plants to hydrogen. In today’s RBN blog, we discuss a multistate push to make the Rockies a hotbed of hydrogen-related activity.

As we said in our first blog on hydrogen hubs, a provision in last year’s $1-trillion-plus Infrastructure Investment & Jobs Act provides up to $8 billion in federal funding over five years to support the development of at least four such hubs around the U.S. The DOE announced in September that concept papers from hub proponents were due November 7 and full applications by April 7, 2023; winners would be notified in the fall of 2023; and award negotiations with them completed in the winter of 2023-24. We’ve already discussed hydrogen-hub proposals in the Houston area, Corpus Christi, Southern California and Louisiana, Oklahoma and Arkansas, as well as plans for a hub centered in Senator Joe Manchin’s West Virginia and maybe a couple of hubs in the Midwest and Great Plains.

Today, we turn our attention to the Rocky Mountains. Many of us think of the Rockies as God’s country: amazing scenery, fresh air, great skiing and fly-fishing, and mountain-biking and hiking … well, you get the idea. But the region also has a more practical side, and more than its share of energy production: coal, crude oil, natural gas, refining and, more recently, wind and solar power. It has a surprising number of other industries as well — mining, cement and manufacturing of all sorts. So, it really should come as no surprise that the half-dozen states along the Continental Divide have the critical mass to develop a strong response to the DOE’s ongoing solicitation for clean-hydrogen-hub proposals.

In fact, four states in the Rockies — Wyoming, Utah, Colorado and New Mexico (light-blue-shaded states in Figure 1) — have been collaborating for several months on a prospective Western Inter-States Hydrogen Hub (WISHH) and planning to develop a formal proposal to be submitted to the DOE. (Hopefully it’s not just WISHH-ful thinking!) Bad joke aside, the memorandum of understanding (MOU) the states’ governors signed in February said their region was “uniquely qualified and situated” to serve as a hydrogen hub, with a strong oil-and-gas industry, abundant renewable energy resources, robust energy-transportation infrastructure, favorable geology for carbon sequestration, and a bevy of existing and potential hydrogen end-users.

The MOU didn’t describe what the WISHH hub might look like, but the states’ existing refinery, carbon-capture-and-sequestration (CCS) and renewable-energy assets provide some clues. As we’ve seen elsewhere in the U.S., the best near- and mid-term prospects for clean-hydrogen production in the WISHH states involve (1) feeding natural gas into steam methane reformers (SMRs) or auto thermal reformers (ATRs) to produce hydrogen and carbon dioxide (CO2) and (2) capturing and sequestering 50% to 95% of that CO2. (The hydrogen produced via this approach is typically referred to as “blue hydrogen.”) 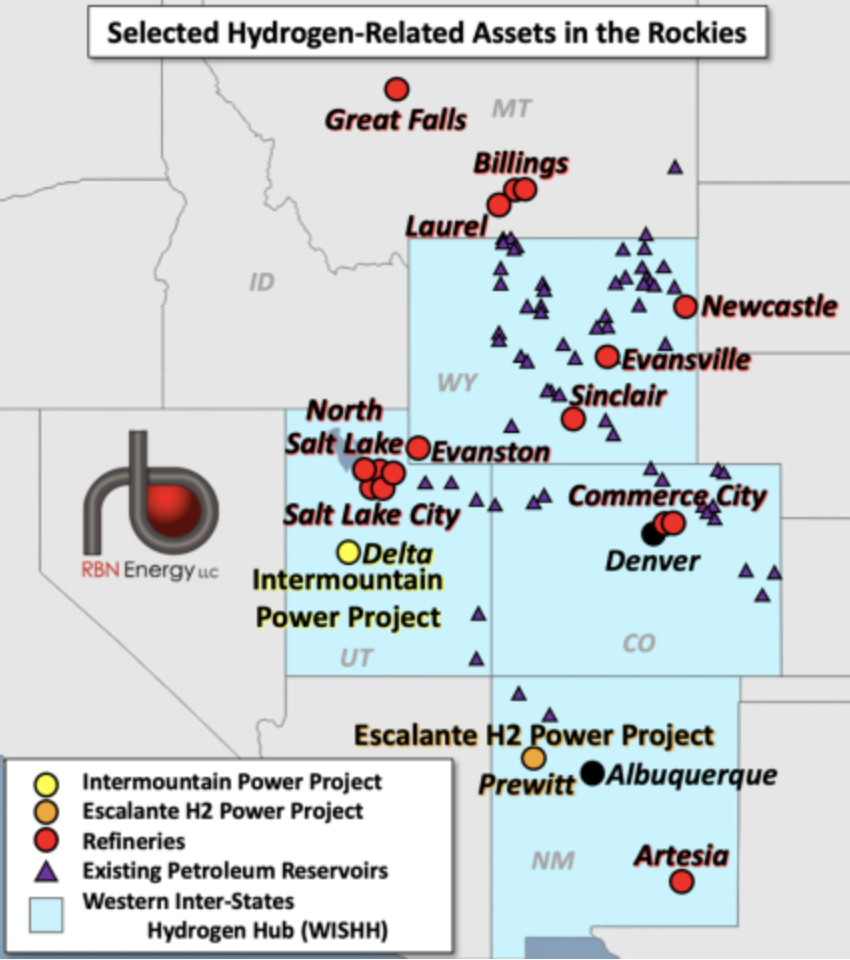 The 16 refineries in the Rockies (red dots in Figure 1), 12 of them in the four WISHH states, are among the leading consumers of hydrogen — they use it primarily to lower the sulfur content of diesel fuel. They either produce the hydrogen onsite (usually with SMRs) or procure it from third-party industrial gas companies (which also produce hydrogen via SMRs). As for the Rockies’ potential for CCS, according to one recent estimate (from the Great Plains Institute) the states of Wyoming and Colorado alone have the combined potential to store 773 billion metric tons (MT) of CO2 in secure geologic saline formations. They also have extensive capacity for carbon storage in geologic fossil basins such as oil and gas fields (purple triangles).

Blue hydrogen produced in the Rockies could be used to replace the high-carbon “gray hydrogen” — which is produced via SMRs without CCS — currently being consumed by refineries and other hydrogen end-users. It could also be used in fuel cells for on-the-road transportation (trucks, buses, etc.) and for blending into natural gas to reduce carbon emissions from gas-fired power plants. As we said in Reunited, hydrogen has about one-third the energy content of natural gas in the same volume, so a 30-70 blend of hydrogen and natgas would reduce CO2 emissions by about 10%-11%.

Speaking of using hydrogen to generate electric power, we think the WISHH proposal to DOE may well involve two power-plant-conversion projects currently being developed in the region. The first, known as “IPP Renewed,” is the planned conversion of the 1,800-megawatt (MW) coal-fired Intermountain Power Project (IPP) in Delta, UT (yellow dot in Figure 1 and photo below), into an 840-MW plant that would be fueled by up to a 30/70 mix of hydrogen and natural gas starting in 2025 and later — by 2045, the plan says — switch to 100% hydrogen.

The IPP is owned by the Intermountain Power Agency (IPA), which consists of 23 Utah municipal utilities and electric cooperatives. The coal plant’s power is sold to these munis and co-ops and to other power consumers in a six-state region. The largest buyer is the Los Angeles Department of Water & Power (LADWP), the mammoth muni in California’s largest metropolitan area.

To supply hydrogen to the planned hydrogen-and-natgas-fired plant, the IPP Renewed plan calls for developing “green hydrogen” production facilities in central Utah — green hydrogen, as readers of RBN’s weekly Hydrogen Billboard report know, uses electrolyzers powered by renewable energy to break down water into hydrogen and oxygen (generating no CO2 in the process). Toward that end, the DOE in June approved a $504 million loan guarantee to Advanced Clean Energy Storage I LLC (ACES), a partnership of Mitsubishi Power Americas and Magnum Development that plans to build what it calls “the world’s largest industrial green hydrogen facility.” The ACES operation (see artist’s rendering below) will use renewable energy from wind and solar farms in the area to power electrolyzers that together would produce up to 100 MT/d of green hydrogen. As shown in the rendering, the hydrogen would be stored in two massive salt caverns, each of which would be capable of storing 150 gigawatt-hours (GWh) of energy.

The power generated by the IPP Renewed power plant would be sold to LADWP and other power buyers seeking to reduce their greenhouse gas (GHG) emissions. According to the City of Los Angeles’ net-zero plan, LADWP will secure at least 55% of its electricity from renewables and other zero-carbon sources (including hydrogen) by 2025, increasing to 80% by 2036 and 100% by 2045.

IPP Renewed is one of the most ambitious hydrogen-fueled power generation projects in the U.S. — Entergy Texas’s proposed Orange County Advanced Clean Power Station is another. A smaller project is also under development in New Mexico and it seems logical that it would end up being an element in the WISHH proposal. That would be the Escalante H2 Power Project (orange dot in Figure 1) near Prewitt, NM, which would involve the conversion of a 253-MW coal plant into a facility that would be fueled entirely by hydrogen. The coal plant, still owned by Tri-State Generation & Transmission Association (a group of electric-co-ops and public power agencies in the region), was shut down in August 2020. Under a plan by a 75/25 partnership of Tallgrass Energy and Newpoint Gas, it would acquire the plant from Tri-State, convert its boilers so they can be fueled by clean hydrogen — blue hydrogen and/or green hydrogen produced from water via renewables-powered electrolyzers.

Additional elements of the WISHH proposal are sure to come to light over the next few weeks and months. Given the Rockies’ expanse and the great distances between refineries, the IPP Renewed project in Utah and the Escalante project in New Mexico, the “Rocky Mountain Way” to fashion a clean-hydrogen hub will undoubtedly be different than what’s being planned in, say, the Texas Gulf Coast region, which has a concentrated slew of SMRs, hydrogen pipelines, and hydrogen end-users. Then again, the whole idea behind the DOE’s clean-hydrogen-hub program is to advance a variety of hub proposals and help several parts of the U.S. make the most of what they’ve got, right?

“Rocky Mountain Way” was written by Joe Walsh, Joe Vitale, Rocke Grace and Kenny Passarelli. It appears as the first song on side one of Joe Walsh’s second studio album, The Smoker You Drink, The Player You Get. Released as a single in June 1973, the song went to #23 on the Billboard Hot 100 Singles chart. Walsh said the lyrics came to him as he was mowing the lawn at his Colorado home. “I looked up and there’s the Front Range of the Rocky Mountains and it knocked me back because it was just so beautiful.” The song features Walsh using one of the original talk boxes designed and manufactured by Bob Heil. Walsh gave songwriting credits to all four members of his band Barnstorm, since they helped transform what began as a blues jam in the studio to a fully realized song. The Colorado Rockies Major League Baseball team plays “Rocky Mountain Way” after every home win at Coors Field. The Denver Broncos National Football League team plays Godsmack’s version of the song at home games at Empower Field at Mile High Stadium. Personnel on the Joe Walsh record were: Joe Walsh (lead vocal, guitar, keyboards), Kenny Passarelli (bass, backing vocals), Joe Vitale (drums, percussion, backing vocals), Rocke Grace (keyboards, backing vocals), and Joe Lala (percussion).

The Smoker You Drink, The Player You Get was recorded between late 1972 and early 1973 at Caribou Ranch in Nederland, CO, and the Record Plant in Los Angeles. Produced by Joe Walsh and Bill Szymczyk, it was released in June 1973. The album went to #6 on the Billboard 200 Albums chart and has been certified Gold by the Recording Industry Association of America. The cover art for the album features a British Sopwith Snipe fighter plane with French colors that appears to be flying upside down as the blue sky is at the bottom and the brown ground is at the top of the illustration. One single was released from the LP.

Joe Walsh is an American guitarist, singer, songwriter and record producer. He started his professional career as the lead singer and guitarist of the James Gang, a rock and roll trio formed in Cleveland, OH, in 1966. He left the band in 1972 to pursue a solo career. In 1975, Walsh joined The Eagles. He released four studio albums with the James Gang and has released five albums with The Eagles so far. As a solo artist, he has released 20 studio albums, one live album, six compilation albums, and eight singles. He has appeared on more than 40 albums by other artists. Walsh continues to record and tour, with six upcoming shows with the James Gang booked in November.