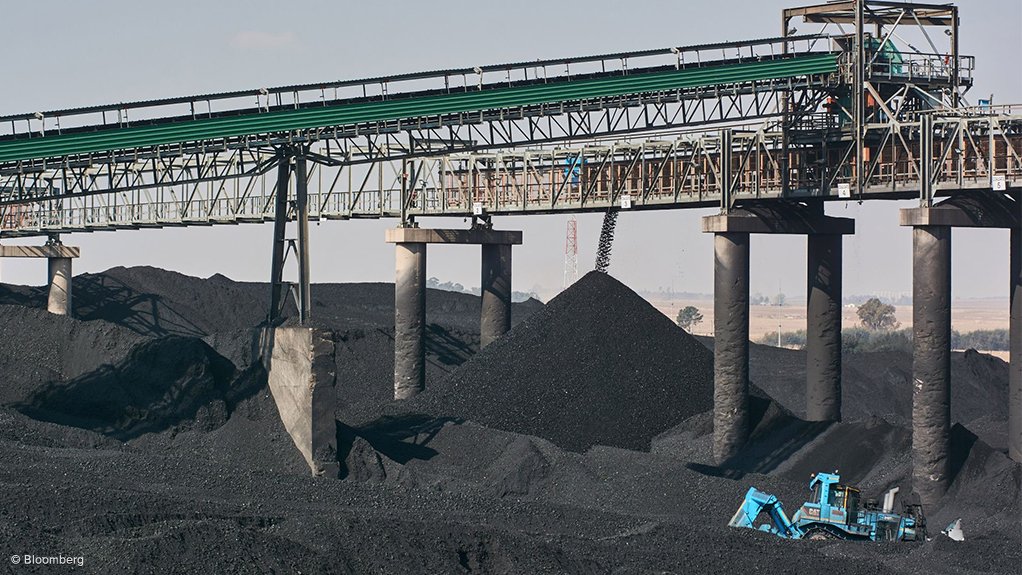 Last November in Glasgow, the world’s climate leaders were locked in a fierce debate over whether the final draft of the summit’s agreement should include a pledge to “phase-out” or “phase-down” coal.

Since then, the more appropriate term would probably be “phase-up”.

Even as the globe is increasingly battered by floods, droughts and storms caused by climate change, the fuel that contributes most to planet-warming emissions is undergoing a renaissance. Global coal power generation could set a record for a second-straight year and remains the world’s biggest source of electricity. Consumption has surged in Europe to replace shortfalls in hydro, nuclear and Russian gas, while top producer China is extracting record volumes from mines to insulate itself from volatile global energy markets.

Prices of exported coal have skyrocketed to records and futures contracts suggest they’ll remain at historic highs for years to come. And while plans for spending on new mines and power plants are a fraction of what they were a few years ago, that companies are still investing in new projects at all is alarming to climate scientists who say the fuel needs to be phased out by 2040 to avoid the worst effects of climate change. As politicians and activists gather in the Egyptian resort of Sharm El-Sheikh this weekend to consolidate the work of Glasgow, Paris and other past COP summits, coal’s resilience demonstrates the mountain the world still need to climb.

“It’s very much hanging in the balance at the moment about whether coal will set a new record this year, whether gas will set a new record and whether power sector-emissions will set a a new record,” said Dave Jones, a lead analyst at the climate think tank Ember in London. “The power sector is the most important that you need to be seeing emissions reductions from this decade. That means that this is far more than a blip. This is a moment where governments have got to get serious.”

For coal titans who’ve grown accustomed to being a punching bag for environmentalists, this year has not only been profitable but also a rare and welcome chance to remind the world of the value of the cheap and reliable energy they provide.

“Decarbonization is necessary, but it must take place in a responsible and coordinated way and we continue to maintain that this is a journey that will take decades, not years,” Mark Vaile, chairman of Australian miner Whitehaven Coal said at an October 26 investor meeting, after the producer posted record annual earnings this year. “Traditional energy sources like coal are critical to providing a reliable baseload of energy.”

Coal has long been mired in controversy. Cheap to mine, easy to transport and simple to burn, it powered the world into the industrial age as it blackened skies and choked lungs. Even after technology reduced direct air pollution, coal continued to be the leading source of greenhouse gases in the atmosphere as it releases more carbon dioxide than oil or natural gas, and mining it unleashes torrents of even-more-potent methane.

In order for the world to reach net-zero emissions by 2050, the International Energy Agency says coal power plants need to be eliminated in developed nations by 2030 and in the rest of the world by 2040. And yet hundreds of billions of dollars are forecast to be invested in new coal assets through the middle of the century, and key nations like China and India are forging ahead with plans to roll-out vast new power plant capacity.

Last year was supposed to be the beginning of the end for the dirty fuel. Consumption had declined in both 2019 and 2020. Alok Sharma, president of the United Nations-led COP26 climate conference, spent the year urging world leaders to “consign coal to history” when they met in Glasgow in November.

Instead, a strong industrial rebound from the pandemic drove coal consumption to a record. Widespread power outages in the world’s top coal users China and India made leaders there double-down on ensuring supplies of the fuel were available to keep their economies humming. And in Scotland, a tearful Sharma apologized to delegates when a pledge to “phase-out” coal was changed to “phase-down” at the last-minute, on the insistence of Beijing and New Delhi.

Things haven’t gotten much better this year. Coal power generation rose about 1% over the previous year through August, according to data from Ember. In Europe, it’s been needed to replace Russian gas to help overcome lower output from nuclear and hydropower. In China, a historic drought in July and August sapped reservoirs of its massive dams, requiring a surge in coal consumption to fill the void. In the US, coal power plant retirements are being delayed and production of the fuel will increase 3.5% this year as miners seek to meet surging demand from around the world and take advantage of record prices.

One of the ironies of the rise in coal use this year is that it’s been tied to droughts that have reduced hydropower generation and left river levels too low for nuclear power plants to operate at full capacity.

And in the two countries that burn 70% of the world’s coal, work is under way on even more power plants that use the fuel. An executive from China’s top engineering firm said he expects the nation to approve more new coal plants through 2025 than the entire fleet of nations like the US. Meanwhile, India plans to expand its coal fleet by about a quarter through the end of the decade unless there’s a substantial drop in the cost of storing electricity.

The result is that even as investments in wind and solar generation jump to records, it’s very possible that emissions from the power sector rise to a new high this year, according to Ember. UN climate scientists have warned that they have to be cut in half by 2030 to be on path to limit rising temperatures to about 1.5 Celsius above pre-industrial times. Emissions from US power plants will increase 1.5% in 2022, according to the Energy Information Administration.

Surging demand has boosted prices for coal to record levels, with benchmark Newcastle coal futures trading around $360 a ton, about six times higher than they were two years ago. Forward contracts are currently trading at above $260 a ton through 2027. Not a single forward contract was above $75 just two years ago.

That’s meant a windfall for miners like commodities giant Glencore, which reported first half earnings from its coal unit that surged almost 900% to $8.9-billion — more than Starbucks or Nike made in an entire year. Coal India, a top global producer, saw profit nearly triple. Chinese companies that extract more than half the world’s coal posted first-half earnings that more than doubled to a combined $80-billion.

Investors have paid attention. Shares for miners like Glencore and Australia-based New Hope have risen to records this year. Analysts have even suggested giving them a break on environmental-social-governance grounds, arguing they’re doing a social good by providing electricity that keeps families warm, businesses open and workers employed.

Even so, investments in coal have been dwindling as shareholders and banks increasingly refuse to approve new spending on projects either on ethical grounds or because of concerns they’ll be forced to shut long before they can generate a profitable return.

Urgewald, a German nonprofit environmental and human rights organization that tracks active coal projects, said about 473 GW of new coal power plants are still in various stages of planning, compared to about 1,600 gigawatts in the pipeline as recently as 2017. Still, if all the operations still planned are built that would increase the global fleet by nearly a quarter.

“The point may be not so far away when retirements outweigh new additions and the fleet stops growing,” said Heffa Schuecking, director of Urgewald. “The real problem is if we want to cut emissions in half by 2030, then something like half the fleet would have to be retired.”

Plans to expand coal power generation in places like China and India may not make state-owned utilities there happy. With coal prices so high, companies that burn the fuel to generate electricity sold at regulated rates have seen profits ebb. New wind and solar power is far cheaper than coal in both countries, according to BloombergNEF data.

“Power firms are caught in the middle of deciding whether to take advantage of the brief window of looser coal power expansion rules, or focusing more on narrower profits on high costs,” said Zhang Mohan, an analyst with CITIC Futures.

Outside of China and India, plans for new production capacity are limited. Along with expectations that gas will remain costly after Russia’s invasion of Ukraine, that should keep prices high as supply won’t be able to catch up with demand.

“The world can’t just turn off all of its coal powered generation,” said Robert Bishop, chief executive officer of New Hope, which is aiming to lift production and studying potential coal sector acquisitions. “It’s going to take some time and there just isn’t enough supply response coming on, so we think prices will remain elevated.”

Still, the year hasn’t been devoid of hope for those working to reduce emissions. Even as China invests in new coal mines and power plants, it’s putting even more money into clean electricity and energy storage that could eventually crowd fossil fuels out of the grid. The US Inflation Reduction Act promises to speed investments in wind and solar in a market that’s been a laggard relative to its wealth and emissions profile.

And in Europe, the looming energy crisis and surging fossil fuel prices have boosted demand for renewables, with imports of solar panels from China on the continent more than doubling over the first half of the year. The risks of relying on Russian pipeline gas have accelerated plans to also reduce overall use of that fuel, a factor that could over the medium-term offset emissions from coal’s recent revival, academics at Princeton University wrote in a paper published last month. Germany’s top utility RWE AG said in October that while it would boost coal use in the short-term through the winter, it would bring forward by eight years to 2030 its exit from the fuel.

It all suggests only a brief reprieve for coal, as companies and nations keep a close watch on their emissions trajectory. “If we burn more now, we need a deeper dive afterward,” said Sebastian Roetters, an energy campaigner with Urgewald.