How Far Are We From Phasing Out Coal? 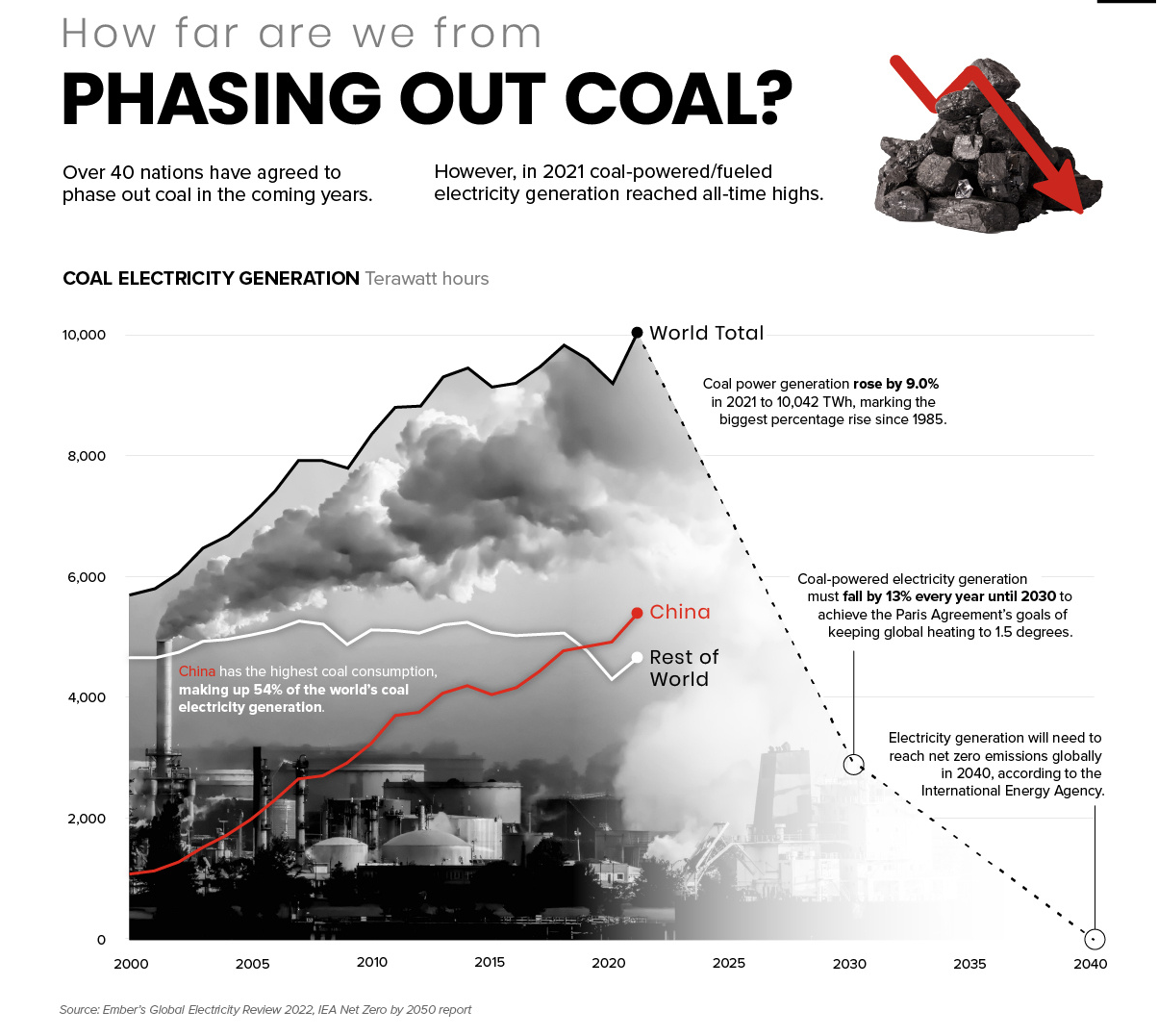 How Far Are We From Phasing Out Coal?

This was originally posted on Elements. Sign up to the free mailing list to get beautiful visualizations on natural resource megatrends in your email every week.

At the COP26 conference last year, 40 nations agreed to phase coal out of their energy mixes.

Despite this, in 2021, coal-fired electricity generation reached all-time highs globally, showing that eliminating coal from the energy mix will not be a simple task.

This infographic shows the aggressive phase-out of coal power that would be required in order to reach net zero goals by 2050, based on an analysis by Ember that uses data provided by the International Energy Agency (IEA).

The main reason is cost. Coal is the world’s most affordable energy fuel. Unfortunately, low-cost energy comes at a high cost for the environment, with coal being the largest source of energy-related CO2 emissions.

China has the highest coal consumption, making up 54% of the world’s coal electricity generation. The country’s consumption jumped 12% between 2010 and 2020, despite coal making up a lower percentage of the country’s energy mix in relative terms.

How Urgent is to Phase Out Coal?

According to the United Nations, emissions from current and planned fossil energy infrastructure are already more than twice the amount that would push the planet over 1.5°C of global heating, a level that scientists say could bring more intense heat, fire, storms, flooding, and drought than the present 1.2°C.

Apart from being the largest source of CO2 emissions, coal combustion is also a major threat to public health because of the fine particulate matter released into the air.

As just one example of this impact, a recent study from Harvard University estimates air pollution from fossil fuel combustion is responsible for 1 in 5 deaths globally.

The Move to Renewables

Coal-powered electricity generation must fall by 13% every year until 2030 to achieve the Paris Agreement’s goals of keeping global heating to only 1.5 degrees.

To reach the mark, countries would need to speed up the shift from their current carbon-intensive pathways to renewable energy sources like wind and solar.

How fast the transition away from coal will be achieved depends on a complicated balance between carbon emissions cuts and maintaining economic growth, the latter of which is still largely dependent on coal power.